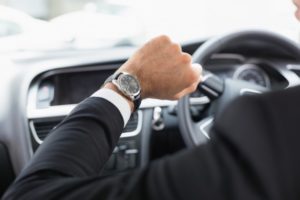 Time is a precious commodity for most of us and particularly for entrepreneurs.?

Trying to juggle the various roles in life while starting a new venture can be overwhelming.? We all have 1,440 minutes a day to maximize and allocate as effectively as possible.?? ??When you think of great achievers in history like Bill Gates, Mother Theresa, and Leonardo da Vinci, it often seems like they somehow had more time to spend than the rest of us.? However,? as author Stephen Covey aptly stated ?The key is in not spending time, but in investing it.??? The truth is that time management is really an elusive concept.? High performers know that self-management is the real key, and they wisely manage themselves to invest their time wisely.

Bridgforth Rutledge is a busy guy.? With six children, a full time law practice as a partner with Phelps Dunbar, a number of commercial and residential real estate investments, and eight restaurants, 37 year-old Rutledge seems to be one of those who somehow has extra hours in the day.?? The secret is how he has chosen to invest his time. As Rutledge noted, ?I try to be intentional in my use of time.? This allows me to focus on what is most important.?? Rutledge began his entrepreneurial journey at age 20 when he bought a HUD house and renovated it.? At age 25, when most of us were still figuring out what to do with our lives, Rutledge secured the land across from the University Medical Center on State Street in Jackson and convinced the CEO of the Back Yard Burgers franchisor to let him open up a franchise restaurant. Rutledge now has seven BYB franchises and has twice been recognized as having the #1 BYB restaurant in the country.? There are a few core principles that have helped Rutledge in juggling a busy life and to be so productive which I have summarized below.

Early on, Rutledge realized that he would have to be very efficient in his use of time.? For example, his family does not have cable and rarely watches television.? While an avid exerciser, he does not indulge in time consuming hobbies such as golf.? For each person, they will have to determine where the ?fat? in their life is that needs to be cut.?? The key is to understand your priorities and to diligently rid yourself of time wasting habits that are inconsistent with your goals.

Similar to the location, location, location mantra in real estate, the same could be said for delegation.?? Most entrepreneurs tend to start off trying to do everything themselves which ultimately proves frustrating and unsustainable. As Rutledge affirms, ?Delegation has been an acquired skill that did not come naturally at first; however, it has been a critical part of my ability to grow my businesses.?? Like other successful business people, Rutledge believes in taking the time to find the right people and paying them well.? While being very selective is more consuming on the front end, it pays large dividends on the back end by having ?A? players on the team who you can trust.

When you look at his accomplishments at such an early age, it is apparent that Rutledge has been willing to take the leap and move forward on projects that involve risk. Many people talk and think about taking the leap into entrepreneurship, but stop short of taking the first step.? Usually the concerns over ?not enough time? and fear of failure are the two main limiting factors.? Rutledge encourages people to take calculated risks and follow their dreams.

As Benjamin Franklin stated ?You may delay, but time will not. So never leave for tomorrow which you can do today.?

In our fast paced world, the ability to manage one?s self and make effective use of time is a critical skill. Bridgforth Rutledge is a great example of what can be accomplished when your life is lived with intentionality and purpose.? I anticipate that we will be hearing about his contributions to the Memphis?business community for a long time.